Many of us assume that internet is widely available in each and every part of the globe. But sadly this is not true nearly two-third population of the world still does not have internet access. With the mission to provide access to internet to the whole world including the remote and rural areas, subspacer’s have taken up this project. This project will spread knowledge, opportunities and freedom worldwide. 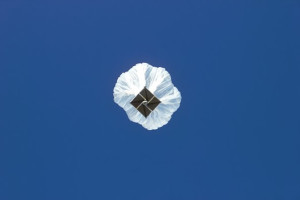 A balloon powered network of internet is called a Loon. This project uses high altitude balloon internet which is strategically placed on the stratosphere at an altitude of 32 km that creates a wireless network in the air with the speed of up to 3G.

These balloons float two times higher than airplanes and weather in the stratosphere. There are numerous layers of wind and these layers have different directions and speed. Loon balloons naturally float in the direction where they are needed. Using a special Internet antenna which is attached to their building people can easily connect to this balloon network.

These balloons identify the layers of wind and adjust themselves to the altitude and float in the requisite direction matching the speed. This is done by utilizing the data from National Oceanic and Atmospheric Administration (NOAA). The internet signals travel through this balloon network one by one, and then reaches the ground station which is connected to the Internet service provider (ISP), finally connects to the internet globally.

The loon is designed in a shape of a giant balloon in the air. It has an inflatable part which is called balloon envelope. These envelopes are composed of sheets of polyethylene plastic which are about 3 mil or 0.076 mm thickness. These are produced by Raven Aerostar. The balloons are filled with helium and are super pressure balloons, which when fully inflated standing 15m wide and 12 m tall, and carry a customised air pump system which dubs the ‘Croce’ releases air to the balloon and controls its elevation. A small box containing circuit boards is hanged beneath the inflated envelope. This box controls the full system, the radio antennae and an Ubiquiti XRF Card which communicates with all the other balloons and the special Internet antenna on the ground and the batteries which stores solar power which enables balloons to operate in the night as well. These balloons are electronically powered by solar panels that are fitted between the hardware and the envelope. A parachute is attached to the top of envelope which helps to take off the balloon easily when it is out of service. In case of a sudden failure, parachute deploys on its own. This high altitude balloon internet generally has a life of 55 to 100 days.