Whether you plan on doing general plumbing DIY projects around the house or have hired a plumber to come over for some repairs, there is something both of you will be frequently using: plumber’s tape. Also known as Teflon tape or pipe leak tape, this specially manufactured tape is perfect for sealing pipes and making them watertight. 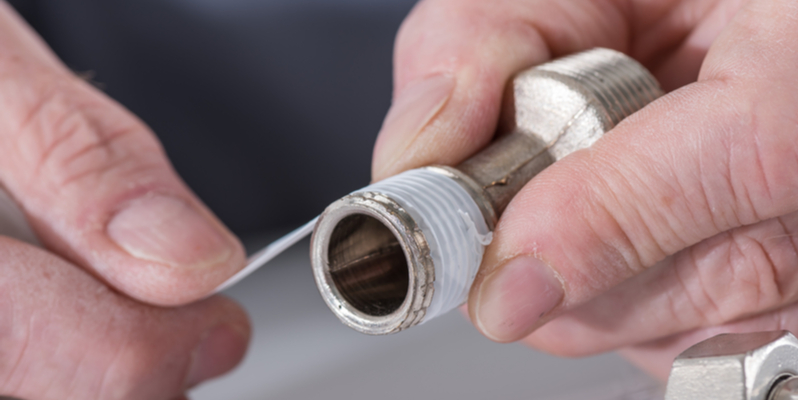 But how does it really work? And how can you use pipe leak tape more effectively? We’re going to answer those questions today.

Plumber’s tape is generally any kind of adhesive that can hold pipes together. There are two kinds of tape that are used to fix pipe leaks: silicone tape and pipe thread tape.

This kind of tape is sometimes called PTFE tape and is used between joints in plumbing to make watertight seals. Pipe thread tape can also be used to lubricate the joints around threading and makes disassembly easier.

You might see silicone tape also called “self-fusing tape” or “self-amalgamating tape.” Unlike other types of plumber’s tape, silicone tape does not stick to anything but itself. It can be wrapped around a pipe leak to form a durable, waterproof seal. Though temporary, it can be used until the pipe can be appropriately fixed.

As you can tell, there are certain scenarios when one kind of pipe leak tape is better than the other. Make sure you use the right kind of tape.

Here is when you use either type of pipe leak tape:

If you notice that a pipe has a hairline fracture, that means the leak is probably located towards the middle of the pipe—not a joint. If this is the case, then silicone pipe leak tape is going to be ideal. The silicone will seal around the crack and prevent water from leaking out. It will buy you enough time to get a replacement.

See water coming from the connection between two pipe joints? It usually means that the putty sealing the joint is starting to fail or that the pipes have loosened over time. Pipe thread tape is great such problems—as long as it is connected to a pipe joint.

Once you have determined where the leak is coming from and what kind of pipe leak tape to use, you can then get around to fixing the problem.

First, you need to disconnect the two pipes from one another. Turn off the water and unscrew the joint that is leaking. Remove the old seal and apply the pipe thread tape. When you wrap, go in the opposite direction of the way you turn the pipe to screw it back into place. Start a second thread at the bottom, wrapping 4-6 times. The tape should be snug, not loose, as you go from the bottom to the top of the thread.

Once everything is wrapped, reconnect the pipes and test for any continued leaking.

Turn off the water and dry the place where water is leaking from the fracture. Once the surface is dry, you can begin wrapping. Overlap the tape a couple of times, making sure it is tight. Be sure to surround the area around the leak, not just the leak itself.

Although pipe leak tape is not a permanent solution, it is useful for preventing leaks from damaging the surrounding areas. It is a helpful solution that buys you time to find a way to either replace or repair a damaged pipe.