Pastor Chris Oyakhilome is the President of Belivers’ Love World Inc. Pastor Chris has many spiritual accomplishments under his belt. He is a true man of God and he shows it through his teachings, spiritual healing, preaching, and through also being an amazing author. Pastor Chris believes in preaching the truth along with the true word of God. 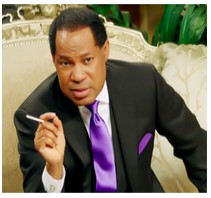 Recently there are been many Nigerian comedians that have been using pastors and their way of preaching as jokes. Pastor Chris Oyakhilome is not a fan of these jokes and he has advised the comedians to proceed with caution and to think twice before tying to use pastors as a joke.

Pastor Chris made it clear that this message came strictly from Jesus himself. The message that the Pastor received from God is to never joke about or with men of God. According to Pastor Chris, if you are a comedian who jokes about God you will definitely face the consequences in a negative way. Men of God should never be made fun of or joked about, that is just something that you shouldn’t do.

Pastor Chris Oyakhilome was very passionate when delivering the message to comedians on the first Sunday of the month. His exact words can be seen below on what he wanted to tell comedians. “For those of you, who are comedians, try all you can not to make fun with pastors in your comedy. Because you are going to see some comedians whose lives would be a comedy. This is what the lord said I should tell you. Because a lot of them who does such will have their lives reduced. Which means you are going to see them and say; is this you? Is this what your life has become?”

“Don’t joke with sacred things. Pastors occupy sacred place. You must know what to joke with and what not to joke with,” Pastor Chris does not think there’s anything wrong with telling jokes; however, jokes should not be told while laughing at men of God. Men of God is something that should be off limits when telling jokes, no matter who you are or what you have.

Pastor Chris believes that there are so many other things that can be joked about or joked with besides the man of God. Pastor Chris stated that a prophet will be sent when God wants to destroy a man. Comedians should take Pastor’s Chris advice into consideration because the power of good and bad karma and God is very real. Comedians should brain storm and think of different jokes to joke about besides churches, people of God and men of God. According to Pastor Chris, nothing good will come along with it.