Salwar-Kameez, popularly known as the Punjabi suit has traditionally been worn by North Indian and Pakistani women and their siblings who then took it overseas for the world to witness. It is a combination of three separate parts: Kameez (top), Salwar (bottom) and a Chunni (stole, also popularly known as dupatta). These three attributes have remained constant, though women on certain occasions might not prefer Chunni depending upon the Kameez designs. 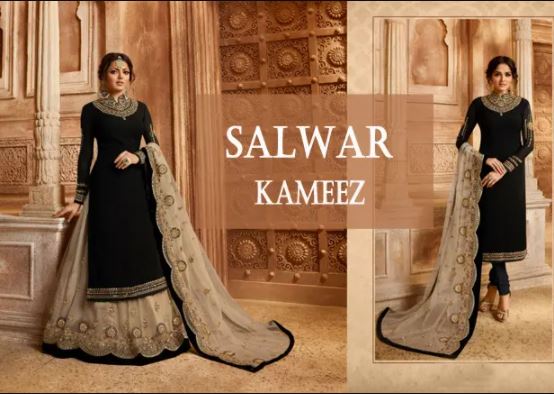 Mughals were the first ones to introduce the concept of Salwar Kameez as we know today. The Men & Women of the Mughal Empire wore attractive and expensive clothes made from the finest materials and adorned themselves with jewellery from head to toe.The dress was made of the finest quality muslins, silks, velvets, and brocades.

There has always been, a “traditionalSalwar Suit” that maintains all the components and slight contemporary over long periods of time. These suits are interpreted according to wearer’s peculiar tastes. For e.g., the “Patiala suit” (from the princely state of Patiala in the Punjab region) is worn by all possible women in that area regardless of caste, class, and religion and has remained the same for many years.

It includes a knee-length Kameez, a baggy Salwar (voluminous than the average salwar), and a long Chunni. This classic style is distinctive and is widely recognized as an iconic attire of this region of the Punjab.Different style and designs which are inspired by Punjabi custom. Salwar Kameez which came out from so many traditions & worn in so many cultures in many forms and style because they are easy to carry out and carries the respect with them. Kolkozy brings to you a wonderful collection of Designer Indian Salwar Suits, worth every occasion to don it.

Salwar Kameez in the 1990s and the early part of the twenty-first century emerged as a mainstream high-fashion garment, popular both on the catwalk and on the street. The fashion gained much popularity when high profile celebrities donned it during their public appearances. The suit thus has been re-characterized as a “global chic” garment. Global fashion entrepreneurs have played a key role in moving the suit beyond “Indian” and “Ethnic” markets, into the mainstream.

They have invented new styles that conceal cultural differences through their design sensibilities and retail skills. Along with older women wearing Salwar Kameez, they have transformed what were earlier negatively tagged as “immigrant ethnic clothes,” derided by the mainstream, and have now turned it into the most fashionable clothes of our times crossing all geographical barriers.

Today, women from all walks of life are asserting their identities through this comfortable outfit, which they consider to be unerring for any event, personal or professional. Another dimension of Salwar Kameez’s popularity is a result of the contemporizing of its design, both in the Indian subcontinent as well as across the world. Design professionals have created innovative new styles and silhouettes while relying upon, and helping to revive, old traditions of embroidery, dyeing, and other forms of decorating.

These new design inputs have led to a dramatic expansion of markets for the salwar-kameez around the world. In these markets, Salwar Suits of all types and levels of quality are sold at a wide range of prices. Designer Salwar Kameez that bear “designer labels” might cost $400 to $1200, while suits selling for as little as $50 can be found in the street markets. On the other hand Online Salwar Kameez market has become quite elaborate.

Yet, in this complicated and multifaceted economy, the real heroes are the elder women, who wear their “classic suits” despite the cultural and racial odds and regardless of how they are socially perceived. These powerful and culturally rich women are the agents of sartorial transmission, who socialized their second-generation daughters to wear the Salwar Kameez on their own terms with sheerconfidence and that is what led to pathbreaking fashion entrepreneurs to create the online commercial markets for Salwar Kameez across the globe.

Salwar Suit trends are part of the wider dynamics of the globalization of Western culture as well as of images created by Asians living in the West, as seen in film, music, literature, and other media. Indo western salwar suits beautifully capture the trends of the west, while keeping us close to our roots. In this speedy globalization, a number of women are in favour of adopting the Salwar Kameez for its plethora of styles and all-round comfort. This zeal of characterizing Salwar Kameez in to a global designer wear, led to a fusion widely known asIndo western Kurtis.

Indo Western Salwar Kameez are like a mid-way of fashion for those who don’t wish to go too Indian or too western. It is the perfect fusion of Indian trends and western styles, giving us the best of both worlds. Global Designers have recreated a traditional Indian dress according to western patterns to suit those women who don’t wish to give up Indian wear, while still wish to look stylish and contemporary at the same time. Indo-westerns have endless styling options but it becomes essential to know what suits you best before laying hands on your favourite pair of Salwar Kameez. Even a great designer piece can look totally disastrous if it doesn’t suit your body type.

We at Kolkozy offer you an exhaustive range of such Designer Salwar Kameez that fits your budget right and is handy for all your occasions.