Surrounded by high snow-clad barren mountains, Beautiful landscapes, Monasteries and Innocent people, these are some of the best things about Leh Ladakh which attracts massive footfall of visitors every year. Each kind of tourist visits  Leh Ladakh where some of them are sightseeing lovers, some of them are photographers, some of them are bike riders etc. This land has the charm which cast the spell on the visitors. The Ladakh is surrounded by high mountains which motivates the visitor to face every challenge of life in a glorious way. The parent range of Ladakh mountains is Karakoram and it borders on Kailash Range. The area of Ladakh lies between Indus and Shyok river valleys stretched in 230 miles. It incorporates some part of Himalayan range also. 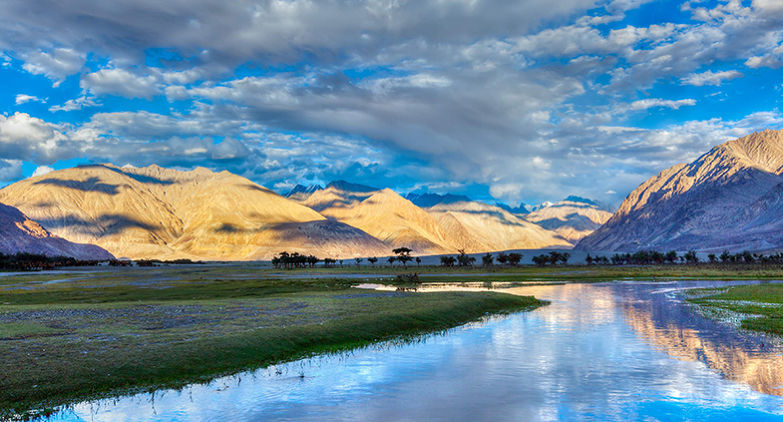 This valley is one of the wonderful valleys of Ladakh. Actually it is one of the subdivisions of Ladakh. According to its Tibetan name Ldumra means Valley of Flower. Diskit is located as the headquarters of Nubra Valley and it is 150 km far away from Leh. The Nubra valley is also known for the meeting point of Shyok and Siachen river. The average altitude is 3048 meters above the sea level. You can access this valley by riding through the Khardung La pass.

The Khardung La name is related to the Tibetan language- Khardung La means Pass of lower castle. Its altitude is 17,582 feet or 5358 meters above sea level  which makes it the highest pass of this world. To reach Nubra Valley you have to ride Khardung La Pass. Here you will feel the adventure of riding which you have never experienced before. This pass is most famous among bike riding lovers of this world.

It is a beautiful monastery and also known as the Thikse Gompa. It is associated with the Gelug sect of Tibetan origin Buddhism. The location of this monastery is also beautiful and is on the top of the hill 19 kilometers far away from Leh.

It is known as the Spituk Gompa or Pethup Gompa and also situated near Leh. The spituk monastery is 8 kilometers away from the Leh district. It was founded by one of the Buddhist saint Od-De in the 11th century.  The surrounding views make it awesome.

Another monastery near Leh is Stok  Monastery which is 15km away from Leh. The founder of Stok Gompa is Lama Lotus Lhawang and built in the 14th century.  The collection of 108 buddhist scriptures makes it special among other monasteries. Another speciality is the 71 feet high statue of Lord Buddha.

It is the wonder of nature. Due to its strange geographical properties this place is also known as the anti gravitational hill. Actually due to optical illusions here you will feel that your vehicle is rolled up high without ignition. It is a fantastic site to experience.

It is the best example of Ladakh & Tibetan architecture. It is one of the beautiful and pristine sites of Ladakh. The whole palace is made up of woods, stone and mud. This place looks like Poatala fort of Tibet where the great spiritual icon Dalai Lama used to live before 1954

It is the most favored place of visitors and photographers. It is the white dome shaped monument and you have seen it in all the pictures related to the Leh Ladakh tour. It was built by the Japanese Buddhist in tribute to 2500 years of Buddhism. Other than the sparkling white color of this stupa, another specialty is the golden statue of Lord Buddha and paintings of birth and death of him.

It is the part of the old traditional silk route between India and China. The Hunder desert is known for the white sand dunes which make this place fantastic and must visit. Here you will enjoy the ride of twin humped bactrian camels. This desert is also known as the moon desert. It is nearby Nubra Valley.

The name of Leh airport is Kushok Bakula Airport, Leh. It is well connected with other major airports via Delhi Airport. Flights are on regular bases according to schedule.

By air, is the best option to reach Leh in less time in comparison to other transportation options.  This is all about Best 10 Places in Leh Ladakh.