When it comes to choosing nutritious food, it turns out many of us are seriously confused about which foods are healthy and which are not. 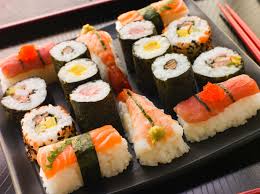 The New York Times and Morning Consult teamed up to ask both hundreds of nutrition experts and everyday American eaters whether they consider certain foods “healthy” or “unhealthy.”

Both groups agreed that some items, like cookies and soda, are definitely “unhealthy.” But for other foods, like granola bars, opinions differed to a shocking degree.

Check out the full report at The New York Times, but meanwhile, take a look at three items the general public doesn’t necessarily peg as healthy — but nutritionists overwhelmingly do:

People are more likely to ask if sushi is healthy than any other food, according to The New York Times’ breakdown of internet search habits. Only 49 percent of eaters polled think that sushi is “healthy,” while 75 percent of nutritionists said it is, indeed. As long as you make smart choices when ordering sushi rolls, you’ll be more than fine.

Nine out of 10 nutritionists say hummus is healthy, but only 66 percent of eaters think so, according to the Times’ data. Surprise! Protein-rich hummus can help you manage your weight, lower cholesterol and maybe even reduce your cancer risk. To reap maximum benefits, make your own at home.

Nutritionists know that quinoa is healthy: 89 percent of them voted it so in the New York Times poll, while only 58 percent of eaters termed quinoa “healthy.” What’s not to love about this so-called superfood? The New York Times suggests its public perception may be lower than it should be because quinoa only recently became trendy. But it’s time we all jumped on this bandwagon: Quinoa is full of protein, fiber and minerals. Get some recipes here.