Japan and South Korea’s Foreign Ministers have been implementing the Korean comfort women deal since they reached their “final and irreversible” decision regarding measures to be taken in December of 2015. Fumio Kishida and Yun Byung-se, Japanese and South Korean’s Foreign Ministers – respectively – have received opposition from different directions on the comfort women deal; however, it has also been named by experts as a potentially successful example of diplomacy. 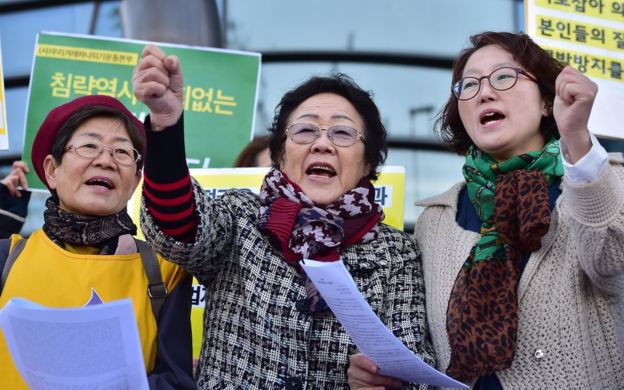 Following their final deal, the Foundation for Reconciliation and Healing was established by the South Korean government. The organization was put in place to serve comfort women and the relatives of those women, alive and deceased. The agreement entails one billion yen, or roughly nine million dollars contributed by Japan to the Foundation for Reconciliation and Healing, alongside a contribution from the Ministry of Foreign Affairs from South Korea. South Korea’s contribution promises 20 million won, or $18,000 to deceased comfort women’s families and another 100,000,000 won, or $90,000 to living comfort women.

While opposition exists and some question the potential success of the comfort women deal, hopes remain high that the deal will not only be a success, but be the start of a new relationship between Japan and South Korea. To start with, much of the opposition comes from the comfort women survivors themselves. This is not to say the reject the deal itself, but many are insisting that the deal represents them in the wrong way due to the nature of their compensation. As it is described, their monetary payment from the deal is in a consolation form rather than a typical compensation form.

This consolation form of payment therefore releases the government from responsibility to what the comfort women were subjected to; whereas, a compensation form would be less of an exit strategy and would show that the government is taking responsibility for the actions. Many women furthermore believe that an apology is necessary alongside the monetary compensation, not to mention that the description of the deal as “final and irreversible” was not the government’s to decide. The women believe that they should have more say in the matter, and have been establishing this point with weekly Demonstrations at the Japanese Embassy.

The Korean Council for Women Drafted for Military Sexual Slavery, leading other civic groups, by Japan also represents South Korean comfort women in respect to how the deal is being laid out, and has fought against its carrying out as well. They further seek to replace the previously named compensation payments with donations from South Koreans, under their Foundation for Justice and Remembrance in contrast to the Foundation for Reconciliation and Peace, and have described the deal as a “diplomatic humiliation.” These groups strive, in addition, to have more Statues of Peace raised around not only South Korea, but the world, to symbolize the comfort women stories.

Another problem posed for the implementation of the Korean comfort women deal would be the recent results of the South Korean parliamentary elections. The ruling party of the parliament, having lost the majority vote for the first time in nearly two decades, is also opposed to the comfort women deal. One potential presidential candidate has called for the overall abandonment of the entire deal, and one newly elected chairperson called it a “catastrophe.” While this is one of just several political obstacles, the deal is unlikely to be given up on, for many reasons including South Korea’s building diplomacy and reputation with Japan.

With positive ends determined to be reached, South Korean President Park Geun-hye has been tasked with hearing all opposition, particularly comfort women testimonies and those from within the government, and reach agreeable ways to solve opposition and integrate resolutions into the deal. If the Park administration is able to work with the survivors who oppose the deal along with any other opposing parties including the civil society groups, then the successful example of democracy that the deal has the potential to be will be firmly put in place, bridging the gap to reconcile those women who were wronged.