Kanyakumari is a beautiful town in the Indian state of Tamil Nadu. It was formerly known as Cape Comorin. Moreover during the ancient times, it used to be one of the most important towns of the ancient Tamilakam and it is still a highly sought after tourist destination. In fact tourism industry has boomed in the city ever since the early 1970s. It is one of those few small towns of southern India where you can hear multiple dialects being spoken on the streets. Moreover in the last decade, tourism has further boomed with an increasing emphasis on the attractions outside the town. These include the surrounding landscapes and a large number of religious sites and historical places in the city. A large number of people come from around the country and the entire world to visit this beautiful city. 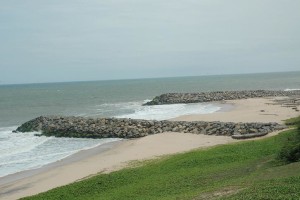 Although there are a large number of charms associated with this vibrant city, it is especially sought after for its beautiful and unique sunrises and sunsets, that itself owes its beauty to the vast water bodies in the surroundings. Moreover if you are lucky enough to have planned your visit around the same time as the Chitra pournami, you can also witness the awe inspiring moonrise and sunset at the same time with your family and friends. The city also has a large number of options for accommodation for the tourists and visitors. All the Kanyakumari hotels offer a large number of facilities to its guests. Moreover all the major leading hotels lie in close proximity to the places to visit around, thus giving a locational advantage to its guests.

One of the most important tourism factors of this city is the pilgrimage sites, as already mentioned above. The city itself acquires its name from the goddess Devi Kanya Kumari, who is considered to be a sister of Lord Krishna. The goddess is known to be the main deity for marriage and is thus worshipped by unmarried girls and women for their marriage. The temple in Kanya Kumari is considered and widely regarded as a Shakti Peetha as well. Shakti Peetha refers to the places where it is believed as per hindu mythology that body parts of Goddess Sati fell during the Tandava performed by Lord Shiva.

The place is also called as Kanya Ashram or the Baalambika, which basically refers to the deity of the temple. It is one of the most rare temples in the country with the most special feature that the Devi (Mother Goddess) is worshipped here in the form of a child. All the rituals performed in the temple also take place in the namboothiri method of Kerala. The deity of the temple is the Goddess of Sanasa, and devotees from around the world visit here with the intention of becoming a sanyasi and take deeksha. You should plan your visit soon with your loved ones and check out these hotels in Kanyakumari with rates in order to make a more informed decision regarding your accommodation choice.

Dimpy Roy is a travel writer working with an Online Travel Guide. She guides travelers to various resources where they can find best hotels in Kanyakumari with rates and choose the suitable one.

Tags:hotels in Kanyakumari with rates