Lord Vishnu is one of the three main parts of the holy trinity of Brahma, Vishnu and Mahesh. While Brahma is named as the creator of the universe, Mahesh is the destroyer of the universe and Vishnu is the protector and preserver of the universe. Lord Vishnu holds a significant place in the life of every Hindu, so much so that he has a following of his own that are known as Vaishnavites.

Lord Vishnu has found his mention in Rig Veda which is the holiest and oldest of all Hindu religious texts along with Lord Indra. Lord Vishnu is represented in human form with blue colored skin and 4 arms wherein he carries 4 objects. Over a period of time, people and devotees started building immaculate, towering temples all over the country.

These are some of the most famous and highly revered Vishnu temples in India: 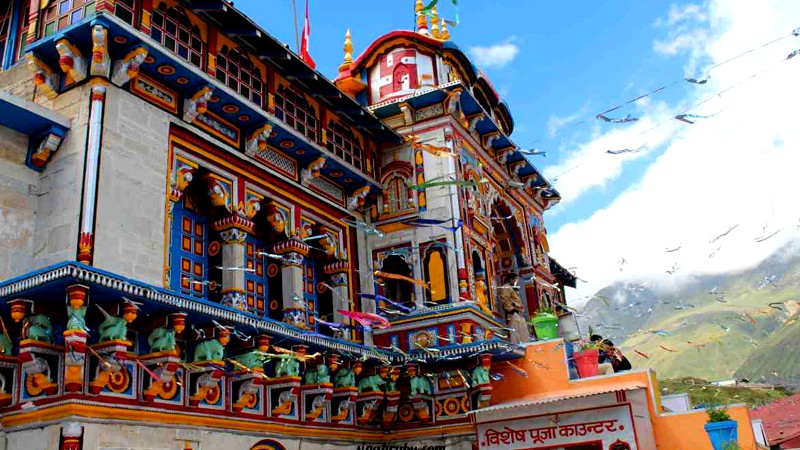 When it comes to iconic Vishnu temples, Badrinath deserves the first spot. Dedicated to Lord Badri or the king of Badri Kshetra which is Lord Vishnu, Badrinath is a major part of the Char Dham Yatra pilgrimage that takes place in the state of Devbhoomi Uttarakhand. Not just that, it is also a pillar of the all India Char Dham Yatra that also includes the holy portals of Jagannath Temple, Dwarkadhish temple and Rameswaram Temple that covers all 4 corners of India.

Surrounded by unmatched scenic natural beauty and on the banks of the holy Alaknanda River, Badrinath Dham is believed to be the exact place where Lord Vishnu had made an appearance to the meditating Nar and Narayan twins. The temple is best visited via Chardham Yatra by Helicopter where the spirituality remains untouched but the travel becomes easier. 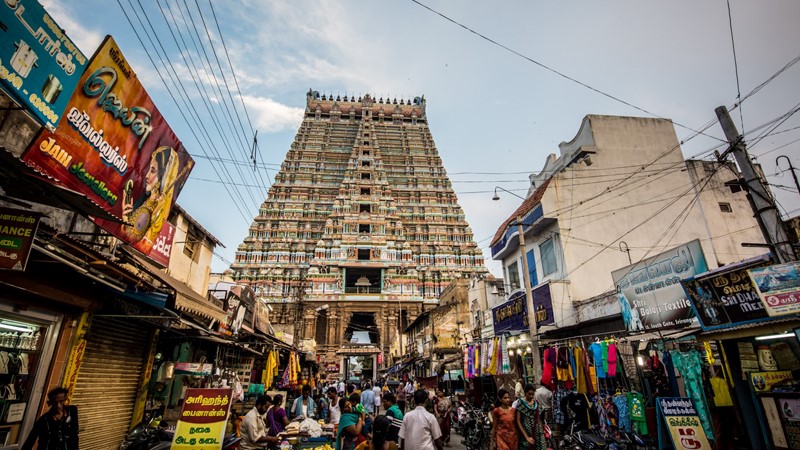 Ranganathaswamy temple which is dedicated to the Ranganatha form of the supreme god or Maha Vishnu, is a pious place of Vishnu worship for vaishnavites and Hindus all over the world and its importance is further owed to the fact that it is the 1st of the 108 Divya Desmas in India. The towering temple structure in itself has easily gathered a spot as a manmade marvel. The architectural style utilized in its making is typical Hindu architecture glorified with the presence of magnificent Alvars and divya prabhanda. Rich with legend and history which is sculpted and engraved in each floor tower, walls and pillars makes this temple one of the foremost illustrious Vaishnava Temples in South India. 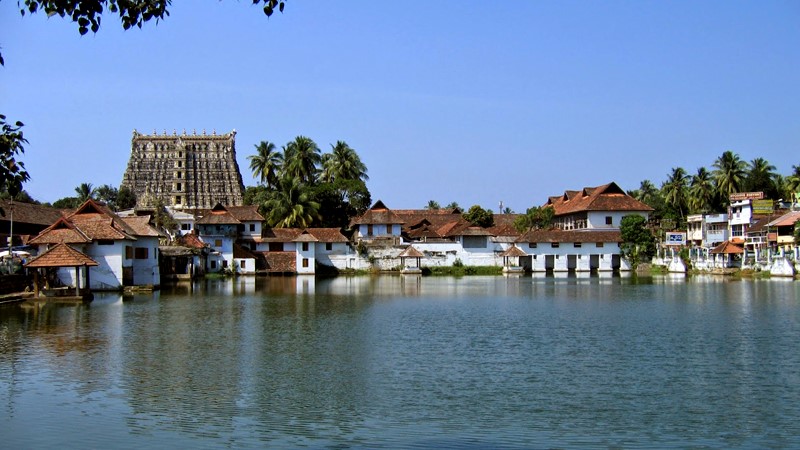 Famous as the richest place of worship in the world and located in Thiruvananthapuram, the current temple structure has been existing since 8th century CE. This magnificent temple also goes by the name of ‘the golden temple’ due to its riches and also due to its golden structure. The principal deity of the temple, Lord Vishnu, is in the form of a yogic sleep or Anantha Shayana posture on top of an infinite Adi Shesh. Numerous Hindu texts including Vishnu Puran, Brahma Puran, Skanda Puran and Padma Puran among others have mentioned this temple. 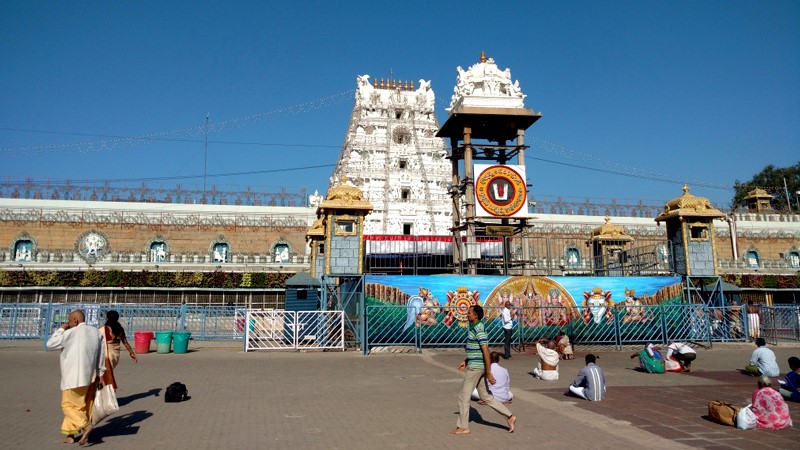 Situated in the scenic hill town of Tirumala Tirupati, VEnkateswara temple has been an iconic place of Vishnu worship for a very long time. The entire temple is dedicated to the form of Vishnu, who is said to have descended to earth to save the world from the trials and troubles of the Kali Yuga. The temple sits on top of the Tirumala Hills which is a part of the Seshachalam Hills range. These hills are not that high and are made up of seven peaks that represent the seven heads of Adishesha. The divinity and pure spirituality here remains unmatched to any other Lord Vishnu temple in the subcontinent. 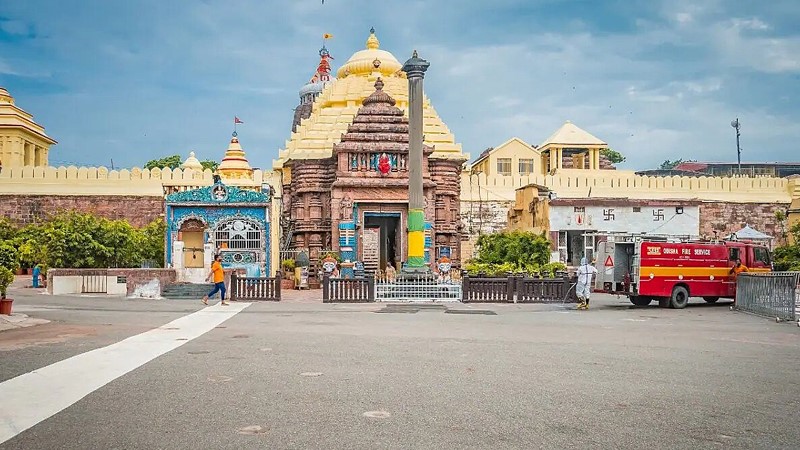 Jagannath temple is one of the most important places dedicated to Lord Vishnu that also forms a pillar of the all India Char Dham Yatra along with Dwarkadhish temple, Badrinath Dham and Rameswaram. The temple is dedicated to Lord Jagannath who is a form of Lord Vishnu and the current temple structure was rebuilt during the 10th century. Other than being popular as a Char Dham Yatra site, the temple also attracts a huge crowd during its annual Rath Yatra festival where the 3 gods of the temple are pulled by devotees and Pandits in a chariot. The presiding deities of the temple include lord Jagannath, Balabhadra and Subhadra made out of wood whose legend can be found in the holy book of Skanda Puran. 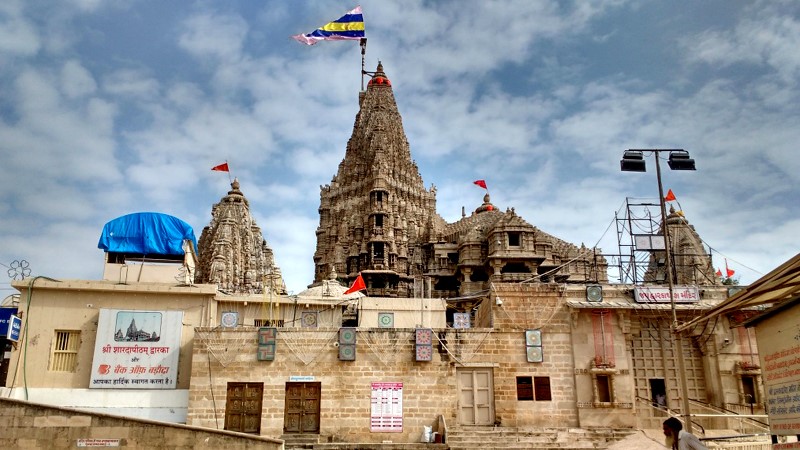 Also known as Jagat Mandir and popular as one of the main temples of Vishnu worship in the world, Dwarkadheesh has a rich historical and legendary value. The temple is dedicated to the Lord Krishna avatar of Vishnu who is worshipped there as the king of Dwarka. Dwarkadhish along with Badrinath, Rameswaram and Jagannath temples form the iconic holy Char Dham Yatra of India. According to Holy Scriptures and literature, the temple was built by Lord Krishna’s grandson Vajranabha, right on the site of the lord’s residence. Although the temple’s building date can be traced back to the 16th century, the entire region of Dwarka was built by Lord Krishna himself on a reclaimed piece of land from the sea about 2,500 years ago making it an extremely holy destination. The glory of Dwarkadhish is further amplified during the complete Dwarka Somnath Tour Package. 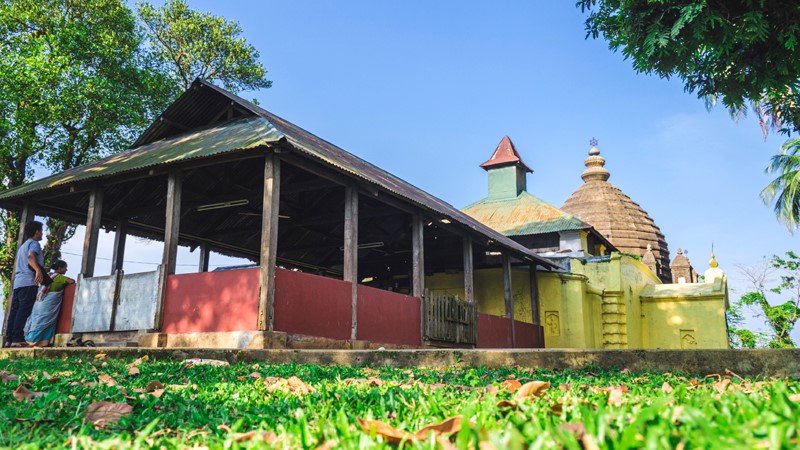 Glorifying the banks of river Brahmaputra in Northern Guwahati and situated at a distance of 24 kms from the main railway station of Guwahati, Aswaklanta is a major pilgrimage site in Assam. This ancient Hindu temple, dedicated to Lord Vishnu was built by Ahom King Shiva Singha during the 17th century and its history is also very interesting. According to legends, Lord Krishna’s horse had felt tired and the lord had tied him here, where the temple now stands. The name itself depicts the legend associated with this place where Aswa means horse and Klanta means tired. The temple is worth visiting during the holy festivals of Janmashtami and Ashokastami when the temple remains brimming with devotees, life,, light and a whole lot of culture. 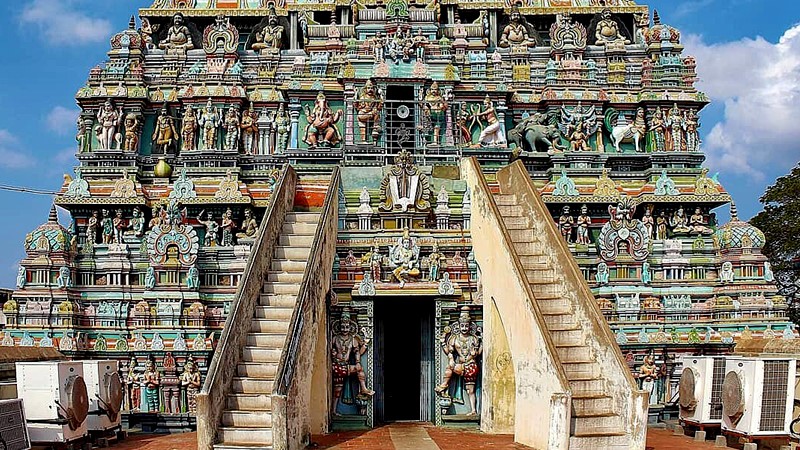 Dedicated to Lord Vishnu and constructed in a Dravidian style of architecture, the temple boasts of being one of the 108 Divya Desams of Lord Vishnu where he is worshipped along with his wife goddess Lakshmi. The temple is another testament to the rich architectural brilliance where the walls are all made out of granite complete with an elaborate 5 tired Gopuram. Originally believed to have been built by the Pandava brothers, Lord Vishnu is worshipped as Koodal Azhagar here. As per legends, Koodal Azhagar is said to have appeared on earth to slay the demon Somuka who is said to have abducted all the 4 Vedas. 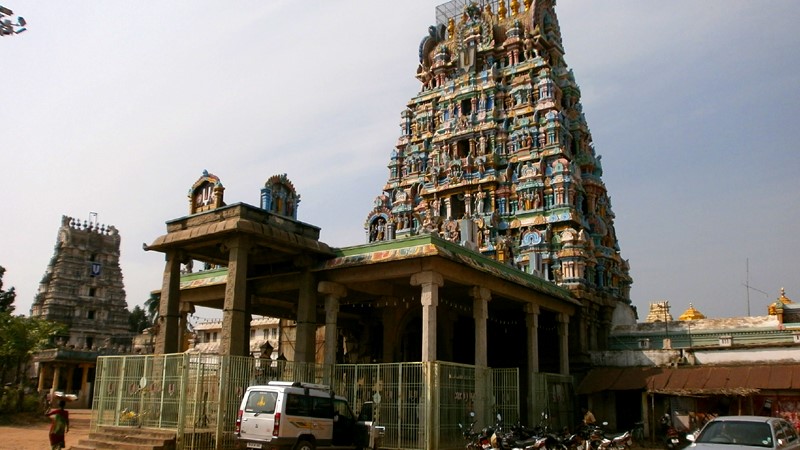 The holy temple of Adikesava Perumal is situated in the district of Kanyakumari and is another one of the most famous and important Divya Desams in the country. According to Tamil hymns, the temple was built during the 7th or 8th century and is set in a very picturesque location where the temple is surrounded on 3 sides by rivers. The main presiding deity idol of the temple is that of a reclining Vishnu and since the temple is blessed on 3 sides by water, the lord is referred to as ‘The Srirangam of Chera Kingdom’. The main deity idol is considered to be older than that of the Padmanabhaswamy Temple where the lord is in the same reclining position. 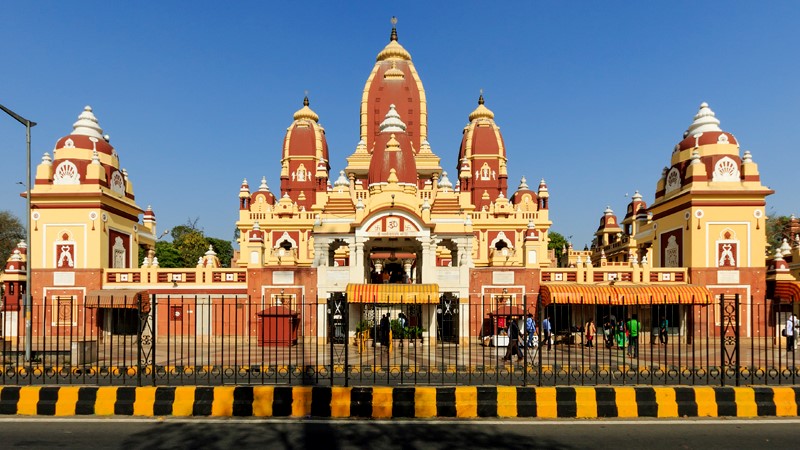 Also known popularly as Birla Mandir, Laxmi Narayan Temple is a major site of Vishnu worship in New Delhi and is spread out elaborately over an area of 7.5 acres. It gained popularity for being the first large Hindu temple to be ever built in Delhi and all the credit goes to Jugal Kishore Birla who got it made from 1933 to 1939. The temple is one of the major attractions and an important place of visit for the tourists visiting Delhi and it springs to life and color especially during the holy eve of Janmashtami or any other major holiday. The side temples are dedicated to Lord Shiva, Lord Krishna and even Gautam Buddha.

Which Is The Largest Vishnu Temple In India?

The Srirangam Temple in Tamil Nadu is often described as the largest functioning Hindu temple in the world since it occupies over 155 acres of space.

Who Is Lord Vishnu?

Lord Vishnu is said to be the preserver and protector of the universe. His role as a god is to keep returning back to earth and restoring the balance of good and evil.

How Many Vishnu Temples Are There In India?

There are 108 Vishnu temples in India that goes by the name of Divya Desam or the pious temples of Vishnu worship.

Which Is The Oldest Functioning Temple In India?

The Mundeshwari Temple, dedicated to the worship of Devi Durga is believed to be the oldest functioning temple in India.

Which Is The Easiest Way Of Reaching Badrinath Temple?

The easiest way is to choose a chopper ride, especially if you are travelling with senior citizens or physically challenged individuals. It will take you from the Sahastradhara helipad in Dehradun to the Badrinath Helipad in just 1 hour.

The temple was built by Maharaja Marthanda Varma during the 18th century although its legend can be dated back to the ancient ages.

How Old Is Koodal Azhagar Temple?

The temple is originally said to have been built by the Pandya rulers with later on additions and certain changes were made by the rulers of the following empires like the Vijayanagar and Madurai Nayaks.

What Is Special About Dwarkadhish Temple?

Dwarkadhish is a Pushtimarg Temple meaning it follows all the rituals and guidelines given out by Vallabhacharya and Vitheleshnath. As per traditions the original temple is believed to have been built by Lord Krishna’s grandson on top of his original site of residence making this temple even more special.

Who Are Not Allowed Inside Jagannath Temple?

Non-Hindus are not allowed and are in fact strictly prohibited from entering the holy temple of lord Jagannath in Puri, Odisha.

What Has Happened To The Treasure Found In Padmanabhaswamy Temple?

Over the past few years, the temple has been opened over 8 to ten times each year. Some of the stored treasures are brought out during special or holy occasions for ritualistic purposes.

Which Is The Oldest Temple In Delhi?

The Yogmaya Temple in Mehrauli is the oldest temple in Delhi.

Where Can I Stay Near Adikeshava Perumal Temple?

There are over 800 stay options for anyone looking to visit the Adikesava Perumal Temple. The hotels are all available on booking websites and visitors can easily book the type of hotel as per their budget.

Who Built The Ranganathaswamy Temple?

The temple was first built by Dharma Varma Chola. However later on, river Kaveri had destroyed the temple Vimana which was later on re-constructed by another early Chola king Killivalavan.