Coorg, the Scotland of India, certainly has all the allures and attractions of an ideal hill station. Located in the Karnataka state, the hilly resort is an ideal place for trekking, long and short nature walks, sightseeing, and relishing other attractions of nature. In addition, the place is also perfect to explore and even try out the home-grown tea, coffee, and oranges etc. A popular weekend getaway for the locals of Bangalore (the capital of the state), the hill town is rapidly becoming popular among the Indian tourists circuit. 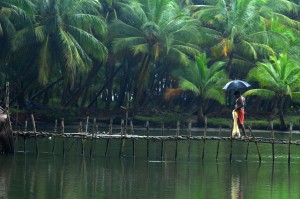 Located about 51km from the heart of Croog lies a place called Talakaveri. It is a place with high religious significance and is believed to be the source of the mighty river Kaveri. By road it takes about one and half hours to reach the holy place. Additionally, there are some luxury hotels in Coorg that offer transportation service to the holy place. A large percentage of the tourists visiting the city of Coorg visit Talakaveri.

It is one of the most sacred places in the state of Karnataka. The place houses spring which is considered to be the origin of the river. However water from the spring again flows underground and then emerges again at a short distance. Meanwhile a tank and temple have been constructed at the place which is visited by thousands of devotes yearly. Locally the tank is called kundike, and bathing in it is one major activity amongst the visitors. However, the bathing is done in mass at particular days of festivities and religious significance.

Being a religious spot, also brings several religious myths and legends to Talakaveri. According to the most known religious belief, the place denotes the link between the river Kaveri, Lord Ganesha, and sage Agasthya. It is believed that the sage kept river Kaveri in Kamandalu, which is a small container that is used to carry sacred water. One day when the sage was meditating, Lord Ganesha took the form of a crow and sat atop of the container. On seeing this, the sage try to shooed the crow away. But the divine crow toppled the container and spilled the water, which was the Kaveri River.

The place has its religious significance since long. Dating back to the medieval era Talakaveri has long been the home to various Brahmin families. A visit to the place when in Coorg tour is a must. Meanwhile, excellent roads connect the holy place to Croog, the commercial centre of Coorg, and the popular Coorg hotels.

Talakaveri is also a scenic place. Nature has always been grateful to the holy place. The regions of Talakaveri are still very much unspoiled. Panoramic views from the peak points of the place are simply mesmerizing. Other than that, there also exists a good wildlife sanctuary named after the place.

In short, Croog certainly is one fine destination for an unspoiled-relaxing vacation. Head to the place and explore all its attractions in real. Meanwhile, as one’s trip of the place won’t be long so choosing the value for money 3 Star hotels in Coorg is a sensible thing to do.

Dimpy Roy is a travel writer working with an Online Travel Guide. She helps travellers to find the best luxury hotels in Coorg.